Many of those who know me know that I am an avid and devoted practitioner of Kundalini Yoga, the yoga of awareness. This style of yoga was famously taught within a very specific lineage in India for generations before Yogi Bhajan brought it to the West to assist in the evolution of human consciousness into its next phase, the age of Aquarius. According to Yogi Bhajan, “Kundalini Yoga is the science to unite the finite with Infinity, and it’s the art to experience Infinity in the finite.” When I first heard this as a 5th quarter student, it bore such a stunning likeness to chiropractic philosophy that it practically slapped me across the face! Not only does Yogi Bhajan reference an art and a science, but he also acknowledges both Universal and Innate Intelligences in this statement. 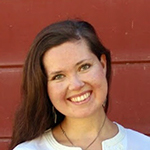 This yogic technology consists of a vigorous combination of pranayama (breath work) and rhythmic asanas (poses) that are embedded into kriyas (a sequence of asanas) for all that ails you from kidney function, to addiction, to enhancing the radiant body for beauty. We also chant a LOT, primarily utilizing the ancient language of Gurmukhi. From a scientific standpoint, chanting is known to activate the Vagus nerve, which we all know is the Rodney Dangerfield of cranial nerves, according to Dr. Strutin, due to its overwhelming list of responsibilities, including innervating parts of the heart, lungs, and abdominal viscera. In other words, chanting is a way of hacking your neurology to enhance the function of all the most critical aspects of your physiology.

One Gurmukhi word that I’ve always had a particular affinity for is naad. Naad means “the essence of all sound” or the “universal sound current.” To me, the definition of naad aligns well with the chiropractic concept of tone. It’s the naad behind the words that we evoke when we chant, and it’s the reason we ensure proper pronunciation of all words we’re chanting. It is said that one can discern the definition of a word simply by meditating on its naad. The naad of a word, when vibrated into physical form by the architecture of the throat and animated by the force of the 5th chakra, has the ability to carry on its breath wisdom that’s rooted in the purity of Truth. This is the gift of the voice.

So why am I sharing all this? Because of the simultaneously humbling and awakening journey I’ve had with this unusual practice (yes, we’re the cultish weirdos wearing turbans and all-white clothes). I have observed all areas of my life, in my slow and steady way, transforming. A sense of peace and ease gently took hold of my defensive behaviors and eased them into safety and connectedness in a supportively challenging container. One of the best outcomes yet: reclaiming my sacred voice! When I was in my first quarter (I am now in quarter 14), I wrote my first article for Lifelines and nearly had a panic attack in the women’s bathroom when it was published due to my immense fear at the unknown consequences of sharing my voice. I am now serving my 5th quarter as a staff writer. And this is just one example of the reclamation of my ability to express myself.

You can imagine my surprise when a book was published earlier this year called Premka: White Bird in a Golden Cage, detailing author Pamela Saharah Dyson’s experience as an assistant to Yogi Bhajan in his earlier days and also as a victim of sexual and psychological abuse at his hands. She, it seems due to mounting evidence, was not his only victim. This news shook the very foundations of my spiritual community and created a fissure between those believing the accusations and those sticking by Yogi Bhajan. I felt betrayed and distrustful of the teachings and I didn’t know where to turn, if not to the yoga. So, I turned to the yoga anyway, because I decided the teachings are separate from the man.

What I’ve come to unpack from Yogi Bhajan’s unceremonious fall from his self-built pedestal is the pervasiveness and power of the Truth, when we’re courageous enough to speak it and when the times support its disclosure. I have also learned to let the “guru,” or anyone else we put on a pedestal, fall gently and with compassion, as doing so demonstrates the way we all should greet the shadow side of our own egoic selves when it rears its head as a common pitfall along the path to self-mastery. I’ve learned that putting someone else on a pedestal serves more to put yourself down than to put them up by creating an unhealthy power differential. I’ve known that “gu” means darkness and “ru” means light, making a “guru” one who has mastered the journey of transforming their own disconnection from Truth into connection – something nobody else could ever do for you (ie. You are your own guru, literally). You, as the guru, then, must have the power to exercise your sacred and divine right to utilize the sound current and share those bottled-up Truths inside, because the whole world deserves it.

This article first appeared in the March 2020 issue of Lifelines, the Life West student magazine.

Share This Post
Have your say!
00
Previous ArticleLooking for a New Exercise?Next ArticleSimple Exercises for the Chiropractor or Student