Dr. Clarence Gonstead, who had a background in biomechanics and engineering, developed the core technique. The basis of the technique began with treating a boy, brought in by his father, who had fallen on the farm and had lower back pain. Dr. Gonstead could see from his exam that the boy’s pelvis was misaligned, and discovered that if he put the child on his side and performed his adjustment on the opposite side of the injury, the child recovered immediately.

Gonstead developed a system of evaluating, adjusting and managing patients. Adjustments are quite precise and methodical, Dr. Currie said, and Gonstead is now one of the core techniques taught at Palmer and Life chiropractic universities.

What sets Gonstead apart, he added, is the ability to find out where an underlying problem is, not just the problem creating the symptom.

The Gonstead technique has evolved since Gonstead died in 1978, but the goal of the Society is to continue the education of the method, keeping the technique close to its foundation.

New chapters are planned for the Gonstead textbook, including one on the intersegmental subluxation of the sacrum. Dr. Currie called this an area within Gonstead of exploration and evolution of growth and knowledge. There is a study in the works that looks at the area, how to evaluate it and when to adjust.

Dr. Currie said the society is also looking at how to create better validation for the tools Gonstead practitioners use.

Dr. Currie is planning another study on whether Gonstead practitioners can be reasonably consistent with a particular tool. Developing protocols to assist with measuring the effectiveness of adjustments consistently will help validate portions of the technique.

As far as the future: “We don’t want to stray too far from the tree,” Dr. Currie said. “We don’t want to grow beyond the core so that the core no longer remains. That has withstood the test of time, but on the periphery there is room for growth and details.”

He pointed to how X-rays are evaluated, and advances in imaging technology, as areas where there might be room for growth of the technique.

The Gonstead Society is also looking at growing its identity, Dr. Currie said. The group holds an annual event where members are encouraged to stretch beyond the core of who and what they know, find places where they can grow, and ask questions.

At the next Gonstead annual event, practitioners will look at the autonomic nervous system and the Gonstead paradigm, he said. “We’re opening up to where we can learn more,” he added. 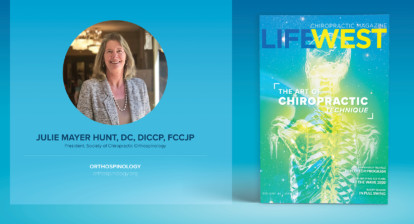