It has been an extraordinary first year for the rugby team at Life West. This novice team beat the odds to earn a 14 and 0 record and advanced all the way up the ladder to compete in the USA Rugby D3 finals.

The Life West Gladiators were handed their first loss of an incredibly successful first-year campaign in the Division III National Championship game against Old Blue RFC of New York by the score of 25 – 7 on May 31, 2014.

The Life West Gladiators were envisioned by Dr. Brian Kelly, President of Life West and Dr. Bruce Chester, a faculty member at the college. The club, led by a brilliant Head Coach, Dr. Tez Molloy and assisted by Vicki Hudson is made up of Life West Chiropractic students along with East Bay area players.

The final championship game was full of great expectations and high stakes. The Gladiators got rolling in their planks, as the big green machine dominated at the breakdown and attacked the forwards of Old Blue relentlessly in stunning drives. They just couldn’t sustain their powerful ball control attack long enough to score against a very talented Old Blue squad. Turnovers and mistakes played a crucial role in Life West never gaining momentum and an experienced Old Blue side was able to capitalize on those mistakes for points.

Dr. Kelly expressed his gratitude, “Thank you to all our players, supporters, coaching staff, members, Spartans, donors, video crew, and team chiropractors who helped get the team on the ground, resulting in an incredible first season. You were great ambassadors for chiropractic and Life West both on and off the field.”

Although the team would have preferred to bring home the first place cup, they left Madison with their heads high. Forwards coach Vicki Hudson remarked, “The Gladiators earned the respect of the USA Rugby community today. Although we didn’t win the trophy, we came home with runner-up hardware.”

The game was not without controversy. Old Blue fielded eight Division I players on their Division III side after going through several layers of arbitration to justify this seemingly unfair practice. Nevertheless, the Gladiators controlled the ball several times throughout the match and played with the heart and desire of true champions.

The Gladiators would like to thank all of the support they received from the entire Life West community throughout the season. “We are so grateful for all those who cheered us on at games, who supported us in the classroom or in the hallways, who donated their time and money and who came to the viewing party or watched at home. We could feel the love from you and we want to thank you from the bottom of our hearts for being there for us,” said 3rd quarter student Austin “Kermy” Colvill. Fourth quarter flyhalf TJ Gudilin added “we would have loved to bring the championship home to Life West, but we will come back even stronger and more focused next year. Now it’s time for us to heal up and begin a 7’s season in a few weeks.”

The 15’s season is over and the Gladiators enjoyed an incredible ride. The next journey for the team will be 7’s play, which is a much faster paced game, matching seven members per side in seven minute halves. This format provides constant running and very exciting play and will be a first time Olympic sport in Rio de Janeiro in summer 2016. 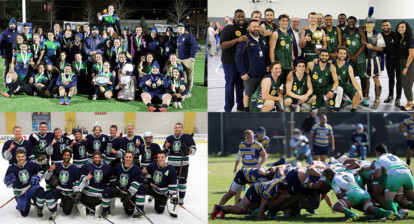